Get the low down from HB Tunnelling

Article: On The Rocks With A Splash of Lime

A multi-million valued scheme is currently being undertaken by Thames Water and its Eight2O consortium – who are two design and build joint ventures that comprise Costain and Atkins, and Skanska, MWH and Balfour Beatty, plus MWH as the programme manager, and which is aimed at protecting the River Kennet chalk stream. This comes as the Environment Agency are currently making changes to the water company’s abstraction licence, which is to come into force in April 2017, of which reductions for the Kennet – which is one of only 200 chalk streams in the world, are part of a national programme to help restore sustainable abstractions across the country.

The scheme – aptly titled the Axford & Ogbourne Licence Reductions, will help ease fears that water removed at Axford and Ogbourne water treatment works (WTW) would have a detrimental impact on the river, which is listed as a Site of Special Scientific Interest (SSSI). 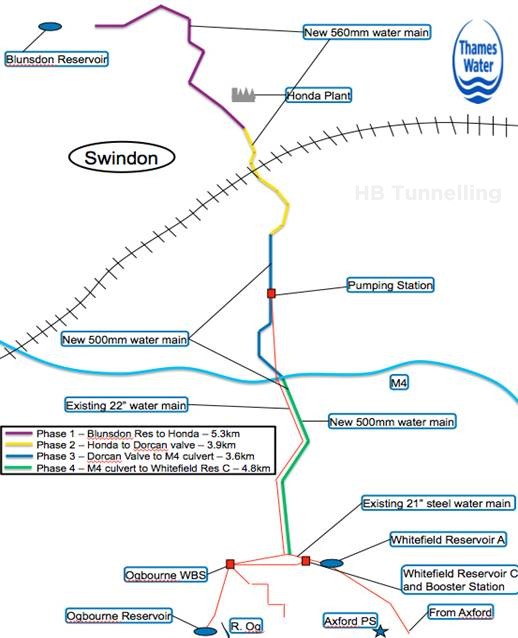 The water company’s solution to protecting the chalk stream aquifer was to construct an 18.2km-long pipeline to transfer water from north to south Swindon, which would mean it could completely cut out taking groundwater from the River Ogbourne area – which is an area that feeds into the Kennet, and reduce by half, the amount of groundwater it takes out of the Kennet catchment at Axford.

The Ogbourne licence would therefore be reduced to zero – Thames Water currently takes on average now about 3.5 Ml/d; whilst the Axford licence would be reduced from 13.1ML/d to 6ML/d at times when the flow in the River Kennet is low.

From a specialist point of view, the most complex piece of engineering was the 84m-long section of tunnelling beneath the Great Western Mainline – or under-track crossing (UTX).

This was located to the north-east of the A419/A420 roundabout and parallel to the A419 bridge, which crosses the track. The UTX itself comprised the construction of two shafts and a 1200mm dia. tunnel, the depth of which would always be governed by the location of the limestone interface.

Environmental Scientifics Group (ESG) undertook a series of boreholes as part of the ground investigation both in 2015 and more recently in advance of the proposed UTX in order to provide the client with more detailed information on the Stanford Formation, which they found its rock characteristics to possess strengths not exceeding 18.2Mpa.
HB tunnelling, who at first opted to drive the tunnel using a TES1200E backacter until it was recommended by Atkins as having to be driven using a closed-faced tunnelling machine, therefore the specialist proposed using a Herrenknecht AVN1200.

The reasoning behind the re specification could be considered two-fold. Mitigating settlement and taking the drive beneath the clay/limestone interface, thereby keeping a uniformity of ground in which to construct the tunnel.

“Network Rail require crossings to be a minimum of 4.3m below the track. The railway is also within a cutting, below the surrounding ground level,” explained Contracts Manager Andy Fallon. “At the minimum allowable depth for the crossing, there is a change in geological strata from the Ampthill/Kimmeridge Clay Formation to the Stanford Formation Limestone. The tunnel crown was therefore lowered to 2m below the interpreted clay/limestone interface level, in order to tunnel within one strata and to reduce risk for the tunnelling works.”

Due to the topography and the 4.5m cutting in which the railway ran, a 17.55m-deep launch shaft was dropped as a 6.50m dia. caisson, using a series of four-35T hydraulic jacks along with a 360 c/w breaker. 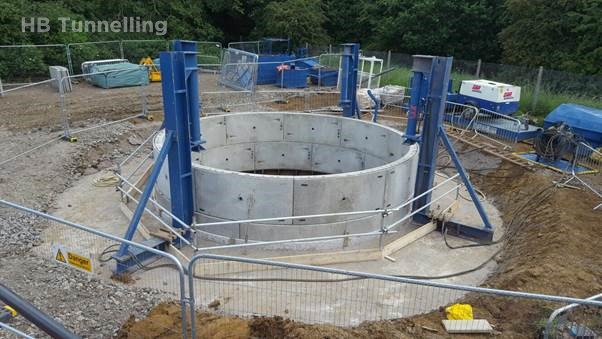 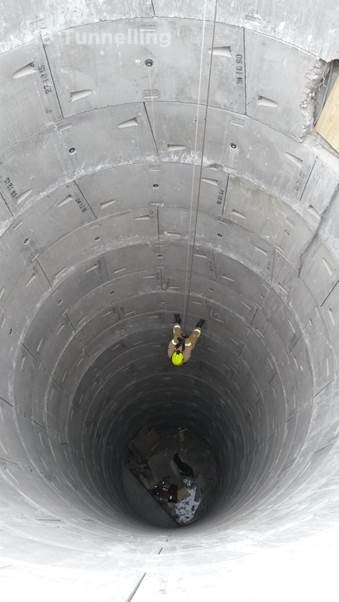 The reception shaft, was dropped in a similar manner but as a 4.50m dia. shaft – being slightly deeper at 17.6m in depth.

Both shafts were dropped with no real problems, with sub artesian head pressures of approximately 6m becoming present at around 10.5m, which were ably managed by the specialist using a 4” hydraulic pumping system.

“Both launch and reception shafts possess a 2m-thick base slab,” Andy added. “The Jacking frame was designed to fit against the rings of the shaft; however, we cast an additional 500m-thick thrust block, which was installed in compliance with the temporary works design.”

As for the tunnelling setup, the Herrenknecht AVN came with a standard rock head and cutters and was supplemented by a Bauer BE250 slurry separation system on the surface with a Wyoming bentonite mix with Flopan 533 polymer used as lubrication. 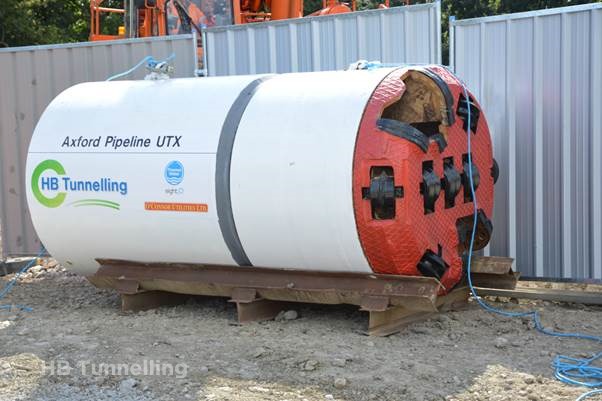 Even though the invert of either shaft was -/+500mm, the line of the tunnel, which was completed both with no problems and on programme, possessed a zero gradient and was completely level, and once demobilised, a 560mm dia. HDPE water main capable at operating at a 6 bar pressure, will be threaded through the structure. 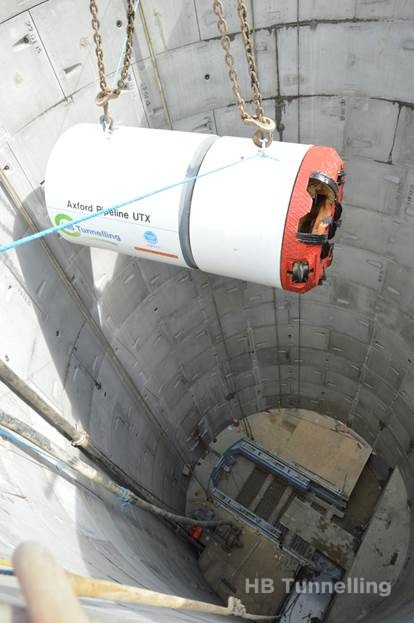 Settlement / Ground Movement
The tunnel has been positioned 2m below the Kimmeridge Clay/Stanford Formation interface, in order to tunnel within the limestone strata and to provide the required clearance from the tracks as per Network Rail standards.

Managing Director Hugh Boyle said “Great teamwork from all involved in the project as not to use the cheapest option available, but to use the right technique” which lead to a successful installation on programme & budget.